I usually avoid ahi tuna due to its high mercury content, but occasionally I will splurge. Obviously fresh, sushi-grade tuna is a plus if you are going to partake—although “sushi grade” is only a marketing term that suggests fresh enough to be eaten raw. Recently, I happened to catch an ahi tuna while sailing so it was clearly super fresh. If you would like a vegetarian version of this dish, substitute the tuna steaks with seitan. 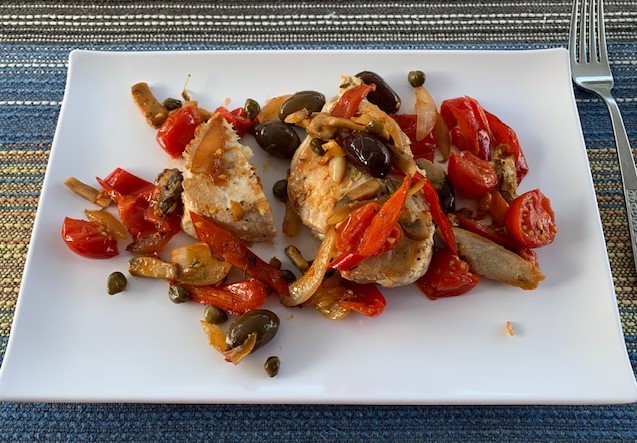 12 cherry tomatoes, cut in half

Once red pepper and seasoning has been added, heat a separate pan to medium-high heat and add seasoned tuna steaks and oil after the pan is hot. Cook for 60-120 seconds on each side until steak surface is lightly browned. If using high heat, after 60-90 seconds on the first side, the second side may only take 60-90 seconds. (See details in the Chef’s Note below regarding cooking times.)

As you add the tuna to the pan, add garlic, olives, capers, and cherry tomatoes to the vegetable sauté pan and heat for 3-4 minutes with an occasional stir.

Place tuna steaks on a plate and spoon sautéed vegetables over the tuna and serve immediately.

How much to cook tuna is controversial.

Ahi tuna are large predatory fish, capable of swimming up to 40 miles per hour. These high speeds require lots of muscle and an oxygen-carrying protein called myoglobin, which provides that deep red color. Cooking breaks down the myoglobin and changes the color in tuna from deep red to a whitish brown and changes the texture of the muscle tissue and the flavor of the tuna as well.

When you cut into a cooked tuna steak and look at the center, from a flavor perspective it should be pink or even red in the center and not completely cooked through. That is why most restaurants aim to serve ahi tuna still either pink or red in the center.

The controversy is that health officials normally recommend that you cook the fish until at least an internal temperature of 140 (F), but by then all the pink has turned whitish-brown and the texture and flavor has changed.

Yet, ahi tuna is a partial exception to this 140-degree internal temperature cooking rule and it has been deemed “relatively safe” and in restaurants is commonly served raw—typically with a warning about eating raw seafood. This allowance is based upon how often it is eaten and the rare risk of illness related to eating ahi tuna raw.

The key to avoid illness with eating ahi tuna is keeping it properly chilled until it is cooked, which is more important than how long it was cooked. If ahi tuna has not been properly refrigerated (freezing is also effective), there is the rare risk of scombroid poisoning, resulting in very bothersome food poisoning symptoms (vomiting, diarrhea, chills, body aches) that can last for 1-2 days.

Scombroid poisoning occurs from eating fish high in histamine. Tuna and mackerel (as well as sardines, herring, and amberjack) do not normally contain histamine but they do have high levels of histidine, and without proper refrigeration, bacteria can convert histidine into histamine. Cooking, smoking, or freezing does not eliminate the histamine once it has formed. (See Wikipedia for details.) You can treat scombroid poisoning and reduce some of the symptoms by taking an anti-histamine medication, such as diphenhydramine or ranitidine, but better would be to prevent this illness.

What is critical is that the fish has been properly refrigerated from the moment it was caught until it is cooked. So if you buy ahi tuna in the store, be sure to put it on ice in a cooler and transfer it immediately to your refrigerator and keep it refrigerated until you either eat it raw or cook it. Do not give it any chance to warm up. (This also means that you have to trust the seller to have kept the tuna properly chilled from the time it was caught. For this reason, some people prefer out of caution to buy frozen ahi tuna steaks and thaw them in the refrigerator prior to cooking.

If you have medical problems and especially if you have a compromised immune system, always discuss this with your medical provider and ask about your risks for eating undercooked seafood.

To cook a 1- to 1.5-inch thick tuna steak and have a rare, deep-red center, (either on the grill or in a sauté pan) sear on one side for 60 seconds at high heat. Turn on the second side and when the internal temperature reaches 90-95 degrees (about 60 seconds), remove it; it will continue cooking in the center and increase by 5-10 degrees on its own (larger steaks will heat more, smaller steaks will heat less), and be 95-100 degrees in the center when eaten.

To cook tuna and have a medium-rare, pink center, sear on one side for 90 seconds at medium-high heat. Flip and when the temperature reaches 110 degrees in the center, about 90 seconds, remove from heat and the center will continue to cook to 115-120 degrees. 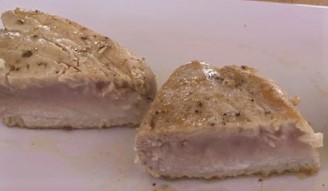 If you prefer to fully cook your tuna steak, remove it at 130-135 degrees, the center will heat to 140 degrees and the steak will turn brownish-white in the center. 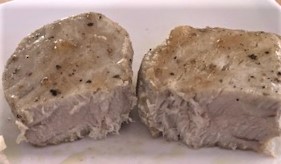 I wish you the best of health and dining,

Please share these recipes with your friends and family!

Send them this link to sign-up to receive my recipes: www.drmasley.com