​For 2021, The US News and World Report rated the Mediterranean diet as:

Let alone that the Mediterranean Diet provides delicious food that is fairly easy to prepare.

The Mediterranean Diet is based upon the eating habits of people living around the Mediterranean Sea: Spain, France, Italy, Greece, and Turkey, as well as middle eastern and northern African countries. It provides a huge variety of foods to eat.

What these cuisines have in common is the consumption of fresh, whole foods featuring vegetables, fruits, beans, nuts, herbs and spices; the predominate use of extra-virgin olive oil instead of butter, margarine, or vegetable oils; moderate amounts of seafood and poultry; and the moderate consumption of red wine. What the Mediterranean diet specifically has avoided is processed foods, sugar, and artificial flavors. Red meats are rarely on the menu or are used sparingly to flavor a dish.

These accolades should not be too surprising, as Mediterranean countries have some of the longest life spans on the planet, despite that they have higher rates of tobacco use, and they have lower rates of heart disease, memory loss, cancer, and obesity. The people of Spain, who follow the 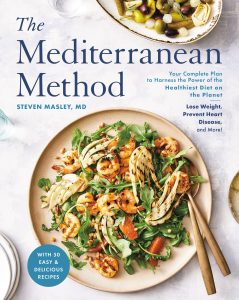 Mediterranean diet closely, have the longest lifespan and the best health of any country in the Western world, and are anticipated to surpass Japan soon as the longest-lived country on the planet.

Heart disease remains the #1 killer for men and women, even though studies have shown we can prevent 90 percent of heart disease with the right lifestyle changes—our biggest challenge is finding a diet and lifestyle that people are willing to follow long-term.

In 2003, the Greek EPIC trial showed that the closer subjects followed a Mediterranean eating plan, the lower their rate of cardiovascular events. Subsequent studies have shown that the closer people living outside the Mediterranean follow this same diet, the less heart disease and longer life they enjoy.

Then in 2018, the large-scale landmark PREDIMED study with over 7,000 subjects published in The New England Journal of Medicine affirmed the CVD-fighting reputation of the Mediterranean Diet; those who followed a Mediterranean diet and added extra nuts or olive oil had 30% fewer events than those following a low-fat diet.

Data published from my own clinic has shown that in patients who follow a low-glycemic version of a Mediterranean diet, the average person shows a regression of carotid intimal media thickness (IMT) scores, and hundreds of our patients had more than a 10% regression in their arterial plaque load.

The most expensive disease in the U.S. is dementia; recent estimates are that the total bill to treat it exceeds $215,000 billion per year. More startling is that the rates of memory loss and Alzheimer’s disease are predicted to double over the next 15 years.

Yet, just as we can prevent most cases or heart disease, there is now growing evidence that we can also prevent dementia and cognitive decline with the right lifestyle changes. PREDIMED researchers tracked the impact on cognition of the dietary interventions over 6.5 years on over 500 participants and controlled for multiple lifestyle and health factors. Those randomized to a low-fat diet had lower overall cognitive scores and more progression to dementia than those in the Mediterranean diet group, plus the Mediterranean group showed greater compliance following the diet recommendations.

Other studies have also shown cognitive improvement and/or reduced cognitive impairment with following a Mediterranean diet, including the FINGER trial, Three-City study in France, the Chicago Health and Aging Project (CHAP), and in a group of more than 1,200 Puerto Rican adults living in the U.S.

Data published from my own clinic confirmed that the closer a person follows these dietary recommendations, the better their brain processing speed and cognitive scores, results which have continued over 12 years of follow up.

In 2016, Dr. Joseph Mancini and his colleagues evaluated five randomized weight-loss trials with more than 1,000 subjects on various dietary regimens including low-fat, low-carb, and Mediterranean. These subjects were followed for at least 12 months, a meaningful length of time given most people lose weight in only the short term and regain it later. The research found that the Mediterranean Diet was more effective than the low-fat diet, and equally as effective as a low-carb diet over the long-term. What’s more, they concluded that those following the Mediterranean Diet not only lost weight, but they had the best improvements in lipid and metabolic profile. The typical weight loss ranged from 10 to 22 pounds lost throughout the 12-months.

In a separate meta-analysis of nine randomized dietary trials with over 1,000 patients in subjects with Type 2 diabetes, again researchers concluded that a Mediterranean diet was the best compared to other diets for weight loss and improvements in metabolic markers long-term.

Adapting the Mediterranean Diet to the 21st Century

Despite all these clear health benefits, there are some limitations and myths related to the Mediterranean diet that should be applied to living in the 21st century.

For instance, some think that the Mediterranean diet promotes large portions of pasta, bread, and pizza—and that adding olive oil, marinara sauce, and red wine will render any food healthy. These are truly myths.

First and foremost, the original Mediterranean diet was followed by farmers, fisherman, and herders–men and women who were physically active for 6 to 10 hours per day. Very few can achieve this much activity today. We, therefore, need to modify an eating plan with a lower sugar and grain flour intake (glycemic load) to match our activity level.

Second, studies that have evaluated the Mediterranean diet have also assessed what components of the traditional eating plan had the most and least benefit. Results from the EPIC trial showed that consuming vegetables, fruit, beans, nuts, and olive oil provided the greatest benefit, and eating whole grains provided the least—likely related to their glycemic load.

This low-glycemic version has the added advantage of appealing to many people who have already shifted towards a low-carb and/or Paleo eating plan.

How they eat is important as well. They enjoy long, leisurely meals typically with friends and family, which fosters close social connections, which is perhaps related to the fact that they have lower rates of anxiety and depression than are found in the U.S.

In summary, let me share my version of the food and lifestyle pyramid of a low-glycemic Mediterranean diet, adapted from my book, The Mediterranean Method.

The pyramid’s foundation is the lifestyle, which features activity, social interaction, cooking, and mindful-leisurely eating. Foods and beverages that are consumed daily include vegetables, fruits, beans, nuts, olive oil, herbs and spices, yogurt, dark chocolate, and water, with moderate intake of red wine and coffee or tea. Seafood, poultry, eggs, and other probiotic-rich dairy products are on the menu several times a week, as are whole grains though in small portions (and gluten-free as needed). My pyramid limits but does not eliminate red meat, sweets, and potatoes. 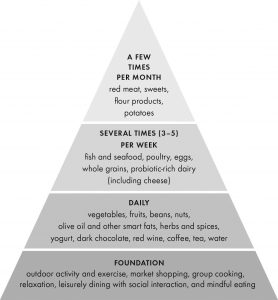 The Mediterranean Diet is not just a short-term eating plan. It has been followed for centuries and tested in numerous long-term clinical studies and been found to be the best diet on the planet for long-term adherence and for healthy eating. The food is delicious, generally simple, easy to prepare, and the ingredients can be found at your local grocery store. This is an eating plan that truly combines proven health benefits with delicious food—no other diet can embrace the saying as well.

If you have not yet purchased your own copy of The Mediterranean Method, containing 50-plus awesome recipes and many photos, now is your chance, click here.

To Your Health & Bon Appétit!