Sailing Across the Caribbean

Our sailboat, Mariposa—meaning butterfly in Spanish, has provided a wonderful environment to live and social distance during covid. 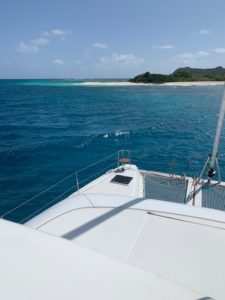 Over the last several months, Nicole and I have sailed from Grenada to Martinique, following the Eastern Caribbean Islands northward (an incredibly beautiful part of the world).

The windward term applies to these most southerly islands because they are upwind, as the Caribbean trade winds come from Africa in the east. Back when Christopher Columbus and other Europeans first sailed to these lovely islands centuries ago, they would follow the trade winds downwind from Spain, south to the Canary Islands off northwest Africa’s coast and continue downwind across the Atlantic for about 20 days, arriving in the most windward islands (Barbados, St Lucia, or Martinique). The trade winds then carried them downwind and to the north along the southeastern US and then east back across the Northern Atlantic via Bermuda and the Azores to Europe.

From these windward Caribbean islands, ships could sail south towards St Vincent and Grenada and on to Columbia and Panama, or north, which is downwind along the island chain towards the leeward islands (Dominica to the Virgin Islands) and to the Greater Antilles of Puerto Rico, Hispaniola, and Cuba. The distance between islands on a sailboat is relatively

small, about a 4- to 6-hour sail across open seas. 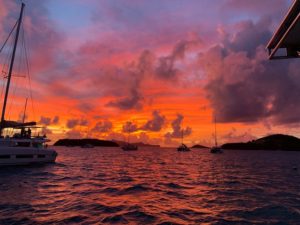 In this part of the world, the weather has been remarkably stable most of the time. There is a 15-25 mph breeze almost every day and night. Temperatures are in the mid-80s in the day and low 80s at night. It rains more in the summer than winter, yet for most of the islands, there is enough rain to keep the tropical forests green and beautiful year-round.

Of course, the exception to this stability is the occasional hurricane that passes through the Caribbean between July and October, bringing devastation to any island in its path.

Global warming has made the destruction risk far greater as storms become stronger and more frequent, which is why many insurance companies are now forcing sailboats to depart from these islands during hurricane season, either heading south to Grenada, which is at 12 degrees latitude and south of the common hurricane path, or north as far as Florida, despite that Florida sits in the middle of the path of many storms.

While on the boat, technology keeps me connected to colleagues and scientific journals, meaning that I can work almost as well from a boat as I can from my home in Florida. Living on a boat we tend to keep at least 100 feet or more from other people—the exception being grocery store shopping where everyone in these islands has been required to wear a mask, or outside restaurant dining with tables usually at least 6 feet apart; most restaurants no longer serve guests indoors.

Over the last year most of my scientific conferences have been offered online. Scientific articles have always been readily available anywhere there is computer access. And although I stopped seeing patients at my clinic a couple of years ago, the isolation has made it easier to research scientific topics, consult by zoom and phone, and write.

Working from the boat could not be easier. 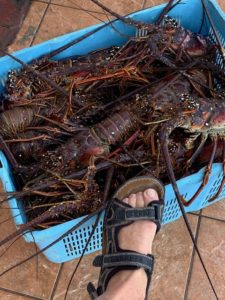 I have made a variety of health discoveries along the way. Despite the far weaker economies in these islands, some of the islands have the longest-lived people on the planet, in particular Dominica, the nature island. The local island preference for walking, gardening, and eating and drinking herbs and produce from local gardens has been a true health blessing.

The people in the islands are diverse. Sadly, most of the original inhabitants of these islands were exterminated by the first Europeans who settled here. Slaves were brought from Africa to run the plantations, like in the southern United States. Yet, people from the middle east and southern Asia also moved to the islands searching for work. As slavery was abolished and the islands nations gained their independence, people of African descent have become the dominant population, although there is a great deal of mixed-race heritage.

If you have been following my recipe blogs, you will have also noted the delightful Caribbean recipes that I have found along the way.

Most of the islands grow cucumbers, okra, lettuce, cauliflower, eggplant, tomatoes, and peppers. Perhaps the most popular vegetable in markets is Christophine (called chayote in Mexico), which is a small green or yellow squash. Fresh local eggs and free-range poultry are also readily available.

There is fish in the markets, but years of unregulated overfishing has decimated what was traditionally a major part of people’s diets in the region. The fish they sell now are relatively expensive and would be too small to be caught back at home in Florida, further hurting the local fisheries. 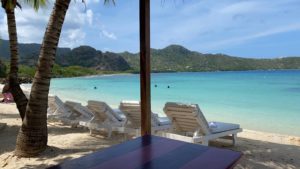 The best diving and snorkeling has been in St Vincent and the Grenadine islands. The best food has been in the French Islands of Martinique and Guadeloupe. Guadeloupe has also had the best tropical forest hiking within parks with well-marked trails. The nicest resorts have been in Grenada and St Lucia. All the islands provide something special to offer, and all have sandy beaches, resorts, underwater sports, tropical rain forests, waterfalls, and Creole cuisine. 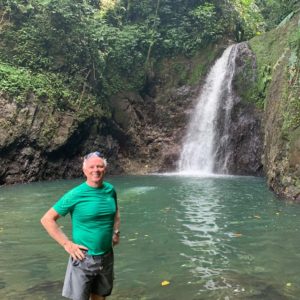 Nicole and I have benefited from all the activity: swimming, hiking, and sailing. And we have enjoyed the natural locally produced food as well. Getting back to nature is a great way to benefit your life.