Food, Health, and Travel Across the Eastern Caribbean 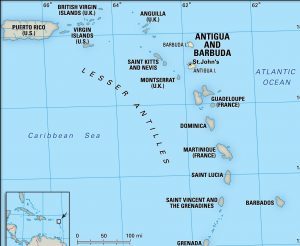 My wife Nicole and I recently completed our zig-zag, 600-mile sailing trip from St Martin to Grenada, along the eastern edge of the Caribbean’s Lesser Antilles Island chain. It was an amazing trip packed with beautiful tropical forests with rugged mountain peaks, stunning beaches, beautiful reefs, friendly people, and a wide variety of delicious food.

There were a variety of pleasant surprises along the way, especially many new Creole dishes that combined ingredients in a way that was new to us, and remarkable health ideas—such as finding an island in the Caribbean with the most 100+ year olds for its population on the planet.

The sail itself was a challenge, as due to all the covid travel restrictions, none of the guests who hoped to join us were able to come. Nicole and I managed to sail the entire distance by ourselves, and sail we did, as there was a strong easterly trade wind breeze day and night, at least 15 knots and sometimes 30-35, as well as occasional high seas when crossing from island to island, often up to 2-3 meters, or 6-10 feet. The breeze was 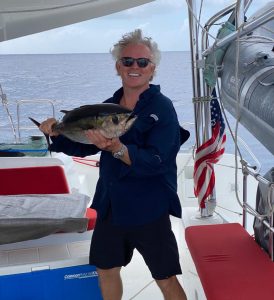 a blessing in many ways, as the trade winds keep the temperatures comfortable, and the breeze is especially welcome when it is hot and humid, day and night. Ironically, the best fishing was when the waves were at their highest while crossing from island to island, which made landing a fish with only two of us while under full sail, a real task—the reward was super fresh tuna for several meals.

Caribbean food is diverse, especially with its French, British,African, and local island influence. The common theme was the use of local fresh fish, local vegetables, and fruits. In particular, we learned to cook using more chayote (perhaps one of the most popular vegetable in the Caribbean which is also called mirliton squash or chocho), onion, eggplant, green bell peppers, tomatoes, callaloo greens (similar to spinach), and use of their featured spices like ginger, cinnamon, nutmeg, garlic, oregano, thyme, marjoram, and clove. They also cook with fruit and use mango, plantain, guava, and pineapple, plus coconut milk in many dishes.

Most of the Caribbean islands are influenced by Creole cuisine. Like the people, Creole food is a blend of the various cultures of West African, French, Spanish, Caribbean, and Native American ingredients and flavor. In the US, we can find Creole cooking most easily in New Orleans, although it is fairly unknown in the rest of the US.

There is a clear cultural, food, and financial divide between the French Antilles and the English-speaking Antilles islands. Not only do the French Islands (Saint Barthelemy, Guadeloupe, and Martinique, plus to a lesser degree St Martin) receive financial help from France with housing, roads, health care, and schools, but they also receive food shipped at discount prices from France. Additionally, the French culture has maintained the quality of many French foods, such as bread, pastries, cheese, cream, and wine—products that are hard to find at this level of quality and a discounted price compared to the English-speaking islands. Not surprisingly then, the French population in the French Antilles has a higher standard of living than we could see in the other unsupported islands. And of course, the dominant language spoken is French, although the tourist industries all speak English as well.

While visiting the French islands, the food was awesome almost everywhere. We enjoyed snorkeling and diving the most in Martinique, and the gardens and tropical forest hiking in Guadeloupe. 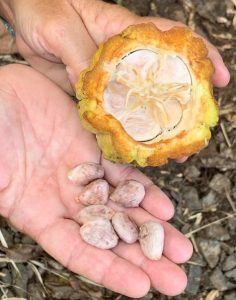 Several islands produce good quality, locally grown chocolate, in particular Dominica,  Grenada, and Martinique. I had seen cocoa pods before coming to the Caribbean, but I did not realize until we picked and sliced a few cocoa pods that the white milky and sticky substance inside the cocoa pods surrounding the cocoa beans is delicious to eat. I enjoyed tasting the milky substance surrounding the beans as much as I do the chocolate that is produced from the cocoa beans—although Nicole clearly prefers the chocolate.

Turns out that Dominica, an island in the middle of the eastern Caribbean island chain, holds the record for the highest number of centenarians in the world (centenarians are people who are more than 100 years old). In 2020, there were 27 centenarians living on this lovely island (with a total population of about 50,000 to 70,000). At one point, they had four centenarians living on the same street within a short walk of each other! Given that Dominica is one of the less wealthy countries in the Caribbean with an economy dependent upon agriculture and tourism, this is a remarkable achievement. For details on why people live so long in Dominica, please Click Here to read my recent blog on this topic.

Dominica is better known for its pristine and beautiful environment (nicknamed the “nature island” with good reason). It does not have mass tourism or as many immaculate beaches as seen across the Caribbean but has far more mountain hikes that are surrounded by lush tropical forest, waterfalls, and canyons, making it a lure for ecoadventure tourism.

The primary downside of travel in the Caribbean was the recurrent covid testing and repeated quarantines. Nicole and I had at least a dozen PCR covid nasal/oral tests over four months as we traveled from north to south through the islands. At least for now, if one is planning to fly from the US to the islands, best would be to get through the testing, the quarantine, and stay on one island, otherwise, every island requires repeated testing and quarantine periods. Hopefully, the quarantine requirements will disappear as more and more people become vaccinated. The advantage of traveling by boat was at least we were able to quarantine and stay on our boat, with an occasional swim to cool off.

Of all the islands, Dominica also had the most lenient and still effective covid quarantine requirements; you had to arrive with a negative PCR test, quarantine for 5 days, then get released when your repeat covid test comes back negative, but they allow you to stay in covid hotels that allow scuba diving and hiking, amusement while you wait to be released from your quarantine, in contrast to other islands that limit you to your own hotel room and room service, unable to leave your room.

St Vincent and the Grenadines with dozens of islands to explore was by far the most remote of the islands we explored. Pristine beaches on minimally inhabited islands with limited infrastructure were common. The views and bays where we anchored were stunning.

Our last stop was Grenada. The island is beautiful, the people friendly, with lots of infrastructure like hotels, and restaurants to complement the awesome beaches, fishing, and tropical mountain hikes. The main downside with our visit to Grenada was the prolonged quarantine, as they kept us locked up four days longer than the 5-6 days originally promised before we arrived. On the upside, Grenada has had only 38 cases of Covid from the beginning, nearly all of which were in tourists traveling to Grenada—the locals have remained mostly covid-free. We were delighted to get our clearance to explore some of the island and several restaurants before traveling home. 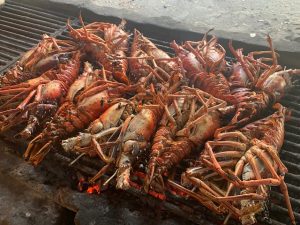 It was an amazing four-month voyage, and we are left with memories of trade winds, lush tropical forests, lovely beaches, colorful reefs, friendly people, and plenty of flavourful and creative food. We look forward to returning next year after the hurricane season.