What Type of Wild Salmon Should You Select?

I am returning home from my annual Alaska salmon fishing trip with my two sons, Lucas and Marcos, plus one of my patients and friend, Tim. We had an awesome three days of fishing and bringing home 325 lbs of vacuum-packed, flash-frozen salmon, with a touch of halibut.

Salmon has amazing nutritional benefits. To appreciate and understand these benefits, knowing more about their lifespan should help you decide which type of salmon you want to pick. During their short 2-6 year lifespan, the environmental diversity in their life is amazing. Salmon start life in pristine mountain streams, swim downstream to the ocean, feed and grow, then return to the same stream to reproduce. The fact that they have such a short lifespan (limited time to accumulate toxins) and that they eat very low on the food chain keeps them clean and low in chemicals, in particular mercury.

Once they reach the ocean, salmon gorge themselves on krill. Krill are very small shrimp that feed on red plankton, rich in Astaxanthin. Astaxanthin is the pigment that makes shrimp, crab, and salmon turn red. We catch salmon as they are within a few months of swimming back upstream to spawn, and at the end of their lifespan. At this time, they feed voraciously to gain strength for the incredible journey home.

Red (sockeye) salmon only eat krill and other shrimp, which is why their meat is so red. When red salmon return to their native streams, their numbers are so vast the rivers literally turn red. They vary in weight from 3-8 pounds. They won’t eat herring or bite at lures that look like herring, hence we almost never catch red salmon, unless we accidentally snag one with our hooks. Netting is the best way to catch this type of salmon.

Pink (hump) salmon are the little guys, 3-5 lbs, and the most abundant. They have the shortest lifespan, only two years. They eat a mixture of shrimp and krill, so their color is pink. Pink salmon is the least fatty and most similar to tuna in 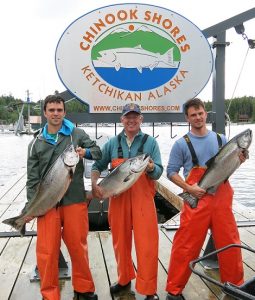 Marcos, Myself and Lucas

texture, so when looking to make tuna fish salad, a much healthier choice is pink salmon. I have a delicious salmon spread recipe in my 30-Day Heart Tune-Up. Landing pinks in the boat is wild. They barely bite the hook and often steal our bait. When we do get them on the hook, initially they don’t resist at all, but once they see the boat, they fight like crazy, jumping and running in odd directions. Their mouths are soft, so this violent outbreak often frees them at the last moment as the hooks tear from their mouths.

Silver (coho) salmon grow rapidly in the ocean eating krill, and return at the end of their lifespan to fatten up and grow by eating herring. Their flesh varies from red to red-orange, depending on their eating habits. They weigh from 5 to 12 pounds. Most years, more than half of our catch is silver salmon. In late June, the same silver salmon would be only 5-7 lbs, and by August-September they can reach 10-12 pounds. They jump gracefully, and are often seen when fishing. Once on a line, they are great fighters and are really fun to catch. They jump and skim the surface as they come into the boat. After netting them, they have this amazing silver sheen, hence their name.

Keta (chum) salmon look like big silver salmon, but with bigger eyes. They weight from 8-15 pounds. Once keta salmon travel upstream, their skin takes on a greenish color, and their flesh becomes pale and mushy and is better suited to smoking than grilling. Yet, the bright silver ketas we caught had an-orange-red flesh and taste much more like silver salmon. So look for bright colored keta salmon if you plan to bake or grill them. When buying, if their color is pale to pink, pass.

The greatest are king (chinook) salmon. They spend one to two years in freshwater river environments before heading out to the ocean to fully mature and have an average life span of 5 years. Not only are they the largest, but they are very hard to catch. They also have a beautiful purple sheen to them, so they aren’t just powerful, but elegant, too. You are not allowed to keep a king salmon under 28 inches, so the smallest we catch are 10 pounds and the largest on this trip was 25 pounds. Although legends talk of 100-pound king salmon, the largest I have seen was 73 pounds and caught by my grandmother from a rowboat. King salmon gorge on herring the year before they go up stream to reproduce and die, so they have the highest fat content and are the richest in healthy omega-3 fats. When we get a king on the hook, the line sings as the reel empties. As they tire, we start reeling in. One jerk of the rod and the hook may pull out of their mouths, so of all the fish, it takes the most skill and finesse to get them into the boat.

I hope you enjoy picking your next salmon for dinner.

Part Two of this blog will focus on “How to Prevent Salmon from Tasting Fishy.”

I wish you the best of health,