For the fifth year in a row, the US News and World Report has ranked the Mediterranean Diet as the best diet on the planet for 2022.

In addition to the best overall diet for 2022, it came in first place for:

The Mediterranean Diet is also the most studied and proven diet plan.

The Mediterranean Diet is based upon the eating habits of people living around the Mediterranean Sea: including southern Europe, the Middle East, and northern African countries.

What these cuisines have in common is the consumption of fresh, whole foods featuring vegetables, fruits, beans, nuts, herbs and spices; the predominate use of extra-virgin olive oil instead of butter, margarine, or vegetable oils; moderate amounts of seafood and poultry; and the moderate consumption of red wine. What the Mediterranean diet specifically has avoided is processed foods, sugar, and artificial flavors. Red meats are occasionally on the menu but are not the main staple in home cooking.

These accolades should not be too surprising, as Mediterranean countries have some of the longest life and health spans on the planet, despite the unfortunate fact that they have higher rates of tobacco use, they still have lower rates of heart disease, memory loss, cancer, diabetes, and obesity.

They did not even mention that it has the best-tasting food of any of the 40 diet plans that were included in their rankings. My wife and I spent 3 summer seasons exploring the Mediterranean Sea on our sailboat, Mariposa and loved eating the food that was featured.

What were the Second and Third Best Diets Overall in 2022?

The US News and World Report had the Dash Diet and the Flexitarian Diet tied for the number 2 spot. For report details, click here.

I wish that they had some form of an elimination diet in the top overall diets, but sadly it was not considered. Considering all the food sensitivities that are known to exist today, and likely millions of people who suffer from a food intolerance (gluten, dairy, sweeteners, corn, eggs, lectins, soy, nightshade, etc), more people should try an elimination diet for at least 30 days to see if their symptoms resolve. I do not believe that everyone needs to give up all these foods if 5-20 percent of the population has some form of food sensitivity, but anyone with chronic health issues should try it.

Adapting the Mediterranean Diet to the 21st Century

Despite all these clear health benefits, there are some limitations and myths related to the Mediterranean diet that should be applied to living in the 21st century.

For instance, some think that the Mediterranean diet promotes large portions of pasta, bread, and pizza—and that adding olive oil, marinara sauce, and red wine will render any food healthy. These are truly myths.

First and foremost, the original Mediterranean diet was followed by farmers, fishermen, and herders–men and women who were physically active for 6 to 10 hours per day. Very few can achieve this much activity today. We, therefore, need to modify an eating plan with a lower glycemic load (lower refined carb and sugar load) to match our activity level.

Second, studies that have evaluated the Mediterranean diet have also assessed what components of the traditional eating plan had the most and least benefit. Results from the EPIC trial showed that consuming vegetables, fruit, beans, nuts, and olive oil provided the greatest benefit, and eating whole grains provided the least—likely related to their high glycemic load.

This low-glycemic version of a Mediterranean diet has the added advantage of appealing to many people who have already shifted towards a low-carb and/or a Paleo eating plan.

In summary, let me share my version of the food and lifestyle pyramid of a low-glycemic Mediterranean diet, adapted from my book, The Mediterranean Method. 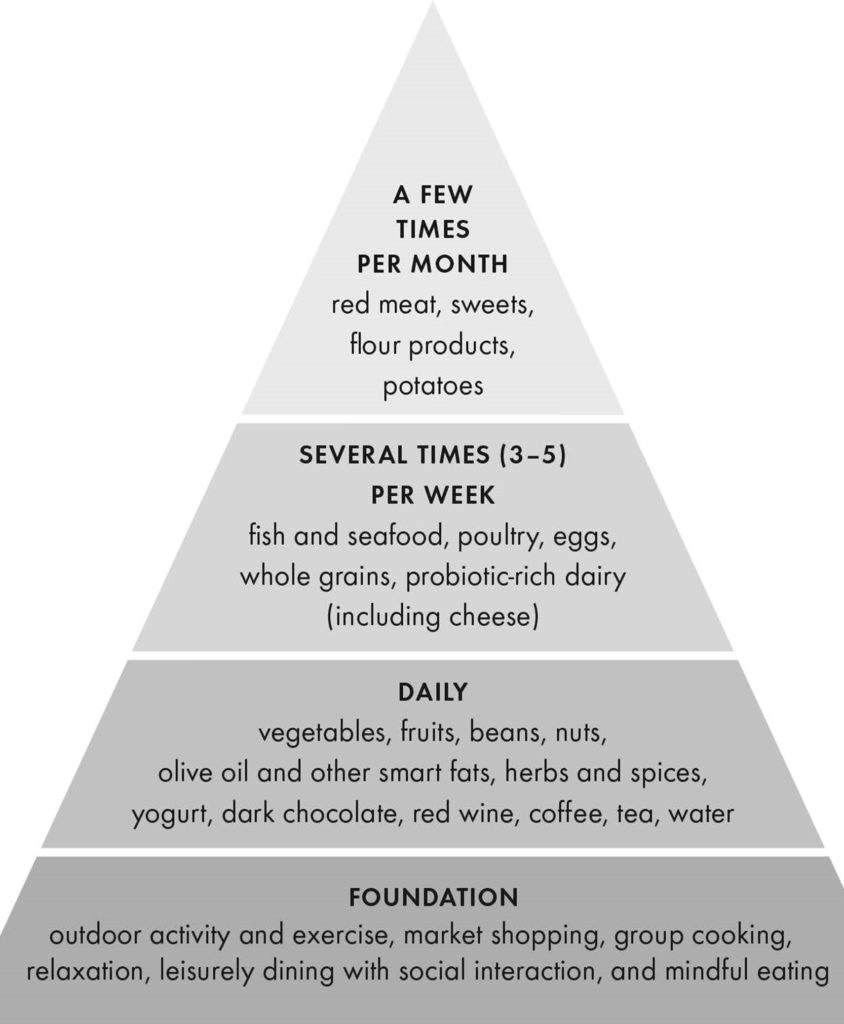 The pyramid’s foundation is the lifestyle, which features activity, social interaction, cooking, and mindful-leisurely eating.

Foods and beverages that are consumed daily include vegetables, fruits, beans, nuts, olive oil, herbs and spices, yogurt, dark chocolate, and water, with moderate intake of red wine and coffee or tea. Seafood, poultry, eggs, and other probiotic-rich dairy products are on the menu several times a week, as are whole grains though in small portions (and gluten-free as needed). My pyramid limits but does not eliminate red meat, sweets, and potatoes, but limits them to small portions on occasion.

The Mediterranean Diet is not just a short-term eating plan. It has been followed for centuries and tested in numerous long-term clinical studies and been found to be the best diet on the planet for long-term adherence and for healthy eating. The food is delicious, generally simple, easy to prepare, and the ingredients can be found at your local grocery store. This is an eating plan that truly combines proven health benefits with delicious food. 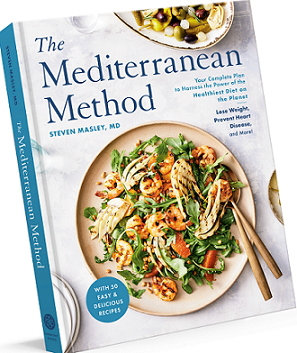 To Your Health & Bon Appétit!

For a link to The Mediterranean Method, click here.