A recent study published in the Annals of Internal Medicine helps support what we have heard many times—drinking at least two cups of black tea daily is associated with a 9-12% reduction in your risk for heart disease and even death.

Tea comes from the plant Camellia sinensis, a species of evergreen shrub that under the right conditions can grow into a small tree.

Tea shrubs likely originated in southwestern China and northern Burma. According to legend, in 2737 BC, the Chinese emperor Shen Nung was sitting beneath a tree while his servant boiled drinking water, a windstorm occurred and some leaves from the tree blew into the water. Shen Nung, who was also a renowned herbalist, decided to try the infusion that his servant had accidentally created. By 2000 BC, tea was considered a medicinal herb with health benefits by Chinese herbalists.

Tea leaves and leaf buds from Camellia sinensis are used to produce different varieties of black and green tea. Herbal teas (better termed herbal infusions such as mint tea, ginger tea, or chamomile tea) likely have different health benefits but were not part of this study.

Today tea is one of the most common beverages on the planet and is grown worldwide in large quantities in China, India, Kenya, Sri Lanka, Turkey, Indonesia, Vietnam, Japan, Iran, and Argentina.

Previous studies have shown that green tea, which is consumed in China and Japan, has clear health benefits for your heart and brain, plus it seems to extend your lifespan as well, while black tea that is more commonly consumed in Europe and North America has been less well studied, although still thought to be beneficial.

In this recent study published August 30, 2022, researchers in the United Kingdom assessed nearly 500,000 men and women aged 40-69 and followed them for 11.2 years, carefully documenting their tea consumption.

Tea consumption is common worldwide and especially in the UK: 89% of people in the study reported drinking tea, and nearly 90% of them drink black tea. One of the strengths of this study was that their analyses controlled for various lifestyle factors including age, sex, weight, race, education, alcohol and tobacco use, health and illness history, and other dietary habits, plus various genes that modify caffeine metabolism.

Those who drank 2 or more cups per day had a lower risk for death, heart attack, and stroke compared to those who drank none. Drinking 1 cup per day or less did not show a significant benefit.

This study is unique as they also were able to assess whether health benefits varied with hot or cold tea, whether having different caffeine metabolism genes made a difference, and whether adding milk and sugar impacted the benefits as well.

Tea temperature did not seem to impact the benefit, although very hot tea has been reported in other studies to be associated with an increased risk for esophageal cancer. So, feel free to drink your tea hot (but not scalding) or cold.

Caffeine metabolism genes did not appear to impact the benefits of tea intake either, although there seems to be a small benefit to lower intake (benefits of 2 cups per day were only slightly higher than 8 cups per day), although as very few people in this study drank decaffeinated tea it makes the true comparison of caffeine intake complicated.

The benefits from tea consumption are believed to be related to the catechins and flavonoids that come from the tea leaves, which block oxidation.

Whether subjects added milk to their tea appeared to make no difference to the benefit noted from tea intake. So, if you tolerate milk and like it in your tea, go for it.

The impact of adding sugar to tea in this study is worth describing. Researchers compared adding sugar or not using any sugar—they did not distinguish between those who added only a small teaspoon of honey or those who used multiple teaspoons of table sugar per cup—limiting our ability to make conclusions on sugar use in this study. Yet the findings showed the following:

There were not enough tea drinkers that drank more than 8 cups daily to validate the different effects between added sugar and no sugar, so I have left these results out.

If you only like sweetened tea, then I would suggest trying a touch of a natural sweetener such as stevia or monk fruit (or in small quantities xylitol or erythritol) and avoid adding sugar or chemical sweeteners (such as aspartame, sucralose, Saccharin). Keep in mind that chemical sweeteners have been shown to kill the healthy microbes in the gut and are best avoided.

Unfortunately, the researchers did not compare organic tea consumption with regular tea. This is disappointing as tea plantations often use large amounts of pesticides and herbicides on their shrubs and choosing organic tea may reduce cancer and dementia rates, although this has never been confirmed in a large clinical study and needs a study to confirm these suspicions.

The bottom line is good news for tea drinkers, assuming that you consume at least two cups per day! People who do not drink tea should consider enjoying a couple of cups per day. Ideally, I would say drink your tea unsweetened and buy organic tea. 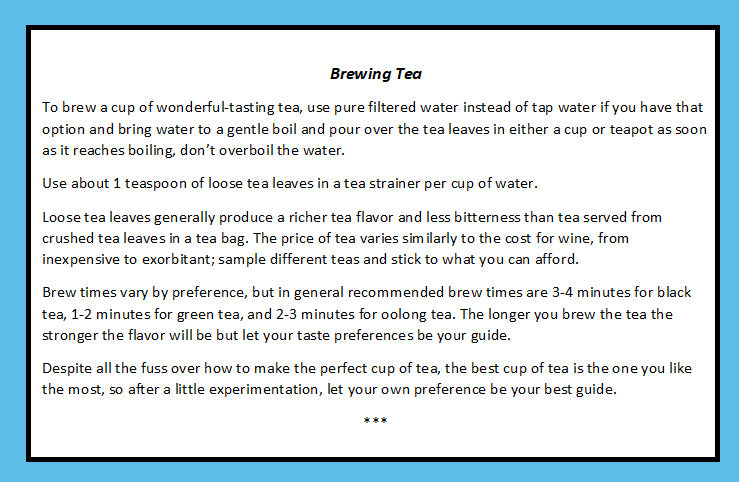 PS: Having written this, I am going to go brew a cup of tea. 😊