Compared to the USA with a massive obesity rate of 39.8%, Italy’s obesity rate of 10% seems tiny. Not only are they much slimmer, but they live longer, too. The average lifespan in Italy is 82.5 years (2016 data) compared to 78.6 years in the US; Italians have one of the longest lifespans on the planet.

How can this be, when they eat all that pasta? The average Italian eats pasta about 3-4 times per week, which is about thr 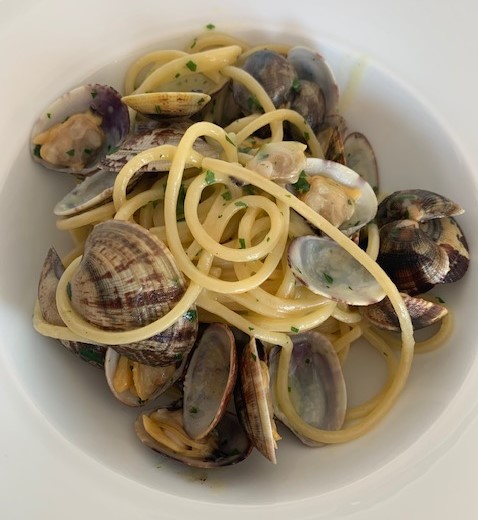 ee times more often than we eat pasta in the US. So how do they get away with that without it impacting their waistline?

As Nicole and I travel in our sailboat along the Italian coastline this last month (sailing south from Elba in Tuscany towards Sicily, and south through the straights of Medina), not only have we been eating out and shopping in markets (and yes eating pasta a few times per week), but I’ve been researching the overall good health of the Italian population, and studying how the Italians eat.

I have found there are at least six reasons that Italians get away with eating pasta so often, and still manage to control their weight and live longer than we do.  Let’s dive in and discuss each of them:

A typical serving of pasta in the US is 2 ounces of dry pasta per person, which is about 4 ounces once cooked. On top of that, often we serve ourselves a second portion (and sometimes even more), and many US restaurants will serve a platter with 4 to 8 ounces of cooked pasta per person.

In Italy, they commonly serve 1 to 1.5 ounces of dry pasta, which is 2-3 ounces cooked, and in a fine dining restaurant, the serving will often be even smaller. They don’t have a second serving either, as this is a defined course that comes with a full dinner. 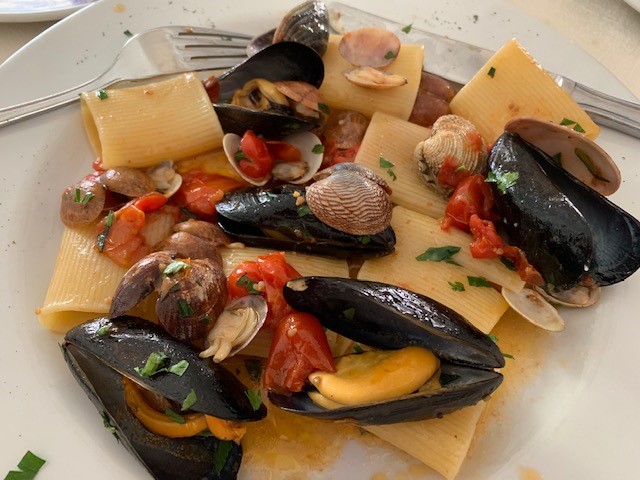 A full meal may include:

The bottom line is that they eat a modest pasta portion (likely half or one-third of what we would eat) and they don’t get an extra serving.

If you eat the same portion size of pasta, bread, rice, or potatoes, pasta provides the lowest rise in blood sugar levels and insulin production (if you recall from my earlier blogs, insulin is the hunger-stimulating hormone). Glycemic load refers to how high your blood sugar levels rise after eating a serving of food and reflects how big a load of sugar you get from eating one serving. The reason for its low glycemic load is that pasta has greater density, and because of this, it is digested and absorbed more slowly.

The longer you cook your pasta, the less dense it becomes, and the greater the rise in glycemic load after eating it. So don’t eat overcooked pasta!

After having ordered pasta multiple times over the last month, I’ve been surprised how al dente (chewy) it is served. It definitely has a bite to it. For years, I have been trying to make my pasta al dente by cooking typical dry pasta for only 9 minutes, but to match the Italian pasta makers, I have had to drop my cooking time to not more than 7-8 minutes.

Chef’s Note: A few pasta cooking rules. First, make sure the water has salt added to it and it is boiling briskly (not just a few bubbles coming to the surface—you want a crazy boiling pot), and that you use extra water in a big pot (do not try cooking pasta in a medium saucepan as the pasta will cool off the water when added and you have to wait for it to reheat and boil). Stir to separate the pasta strands and cook about 7-8 minutes until you test the pasta by biting into it and it is cooked but still chewy—do not wait until the pasta is soft! (As an example, Nicole and I were counting how many times we had to chew before swallowing al dente pasta in a restaurant to clarify how pasta is served here in Italy. Most of the time it takes 7-10 chews for each spiral bite of pasta, far more al dente than you’ll find your pasta cooked in a restaurant in the US.) Turn off the heat and immediately pour it into a colander to drain and serve immediately. Hot pasta will continue to cook and soften if left in a bowl over time.

Not only do they cook their pasta al dente so that it has a lower glycemic load, they are starting to produce pasta that has more fiber and protein in it, with less carbohydrate as well. Companies like Barilla have started adding garbanzo (chickpea) flour to their protein-enriched pasta flour blend, and the result is a pasta that still tastes great but has a lower glycemic load. Look in your supermarket for pasta with added garbanzo flour—it is often called protein or fiber-enriched, and/or low carb pasta. 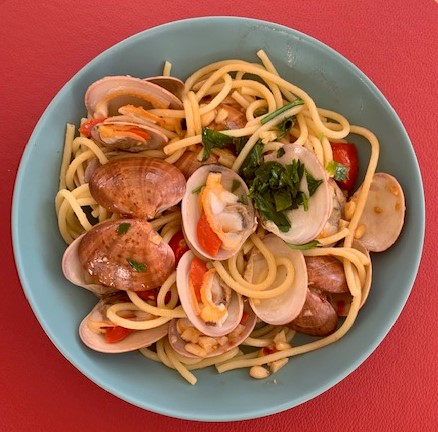 They don’t just have pasta for dinner. Italians serve it with an abundance of vegetables, plus beans and protein, flavored with olive oil, herbs, and spices, plus some fruit for dessert. They avoid processed food. Following a Mediterranean eating plan has been shown to be the most effective diet on the planet for both controlling your waistline and enhancing your health.

The Italians have a lovely tradition, fare una passeggiata (take a walk or a stroll), which is typically done after dinner. Instead of sitting in front of a TV or computer screen, Italians go for a walk in the evening. From 7 to 10 pm in the evening, the streets are packed with couples, friends, and families out walking. It is a lovely sight to see. Walking after dinner not only improves your digestion and burns calories, but it helps to boost your calorie-burning speed (basal metabolic rate—BMR) as well.

Italy, like most of Europe, has avoided planting genetically modified (GMO) wheat. GMO wheat has been genetically modified to increase its gluten content, yet an unintended consequence is that most experts believe that GMO wheat has a higher inflammatory score than original wheat strains. Inflammation won’t only increase how achy you feel, but it lowers your basal metabolic rate (your calorie-burning rate) and makes it easier for you to gain weight.

If you do buy pasta, I recommend brands that are made in Italy that avoid GMO wheat.

Should you start eating pasta every day……… Probably not, but if you eat it like an Italian, you could have it 2-3 times per week and stay slim.

When you do eat starchy carbs, pasta, especially protein and fiber-enriched pasta is a good choice to make, and from a weight control and blood sugar perspective, it would be a better choice than rice, bread, or potatoes.

If you do eat pasta on occasion, be sure to eat it like an Italian. Keep the serving size small (about 1 ounce of dry pasta per person) and serve it with a meal that includes lots of vegetables with either beans or animal protein to go with that meal. When you cook the pasta, keep it al dente.

Take a walk after dinner. And when you buy pasta, choose gluten-free or Italian pasta that is made from non-GMO wheat flour.

I wish you the best of health and Bon Appétit!

Send them this link to sign-up to receive my blogs: www.drmasley.com